Program Goals
To strengthen his processing skills, coach him on executive functioning behaviors, teach him evidence-based memory techniques & strategies and build his metacognition, so that he can become an aware and effective learner.
"He now is able to answer complex questions and maintain topics during conversation. These were areas of difficulty before."
Parent
"These gains have made a remarkable difference in David’s quality of life and his ability to interact with peers and adults. This program is exactly what he needed because it is so customized and has evolved with him.”
Parent
"These gains are more impressive when we consider that the scores measure progress against peers. Without intervention the initial large gap between my son and his typical peers would have only grown over time as children make rapid cognitive gains during the key formative years of their lives. I am very impressed. These results are wonderful.”
Parent
Previous
Next 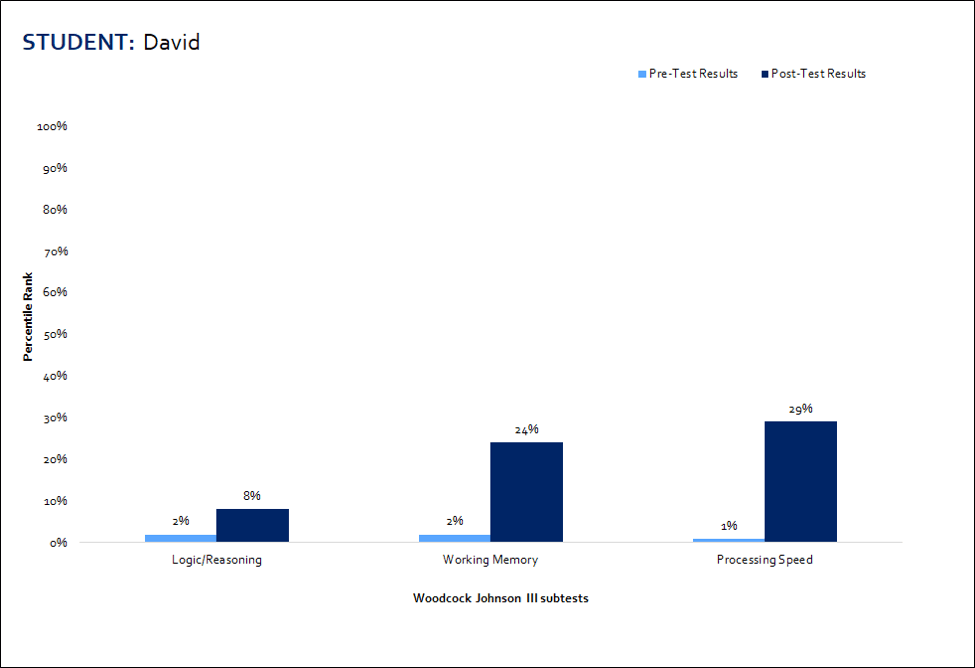 David is a friendly and eager to please young man with Pervasive Developmental Disorder, Not Otherwise Specified (PDD-NOS). His interests include business cards, planes, and different languages.

He struggles with behaving appropriately in social situations, regulating his emotions, as well as in cognitive areas such as using language, making sense of information, focusing and problem-solving. His program involved enhancing his processing skills, executive functioning, memory, and metacognition.

Her assessment revealed above average scores in all areas, except for long-term memory. Her program focused exclusively on teaching, training and transferring evidence-based memory techniques and strategies.

Prior to COGx, David had received several years of speech therapy where he built a bank of vocabulary and practiced mainly conversational language. In COGx, we worked to access this language, which was pivotal to memorizing techniques as well as building awareness to transfer all skills.

David learned new and practiced new vocabulary alongside doing other language “warm up” activities before diving into memory tasks. He was introduced to memory techniques 1-2 at a time, and practiced applying these using various exercises.  He made slow yet steady progress in applying these and eventually became quite strong and natural in applying associations and using self-testing to remember information.

Simultaneously, a variety of exercises with colors, shapes, numbers and/or words were used, along with the metronome, to drill attention, working memory & processing speed. Initially, David required a lot of modifications and prompts to complete the tasks, but as he made progress these were moved.

As the tasks became more difficult, David grew resistant and less engaged. A customized reward system, involving business cards, was implemented to sustain motivation. As David made progress with the processing skills, his ability to perform high-order tasks such as comprehension and problem-solving improved too.

Along with behavior modification strategies, a personalized worksheet was used to make David more aware of his behaviors and help him regulated. For example, at the end of each session, he would have to identify if he was disruptive and when, if he met a goal and where, etc. He also was given tangible strategies to regulate his attention and impulsivity. For example, if he became too excited and disruptive, he would pull out a blank sheet to practice meditation and deep breathing (counting to 3).

Over time, David became more involved in setting goals for himself and his program included him applying techniques to memorize material for school.

David’s ability to rate his performance and monitor his behavior drastically improved, as did his ability to properly apply various memory techniques and strategies.

In the latter half of his program, David had memorized all US capitals and a majority of world capitals using memory techniques.

These gains resulted in improved academic performance. In fact, David’s performance in school improved so much that at his IEP meeting, it was decided that he would remain on the diploma track.