Program Goals
To enhance processing skills, long-term memory and teach study skills so that Rafael becomes an efficient learner.
"My working memory improved to the point where I am once again able to read more than a page at a time without a headache. I am also able to gain pleasure from coding again."
Rafael
"Rafael’s program was highly customized to incorporate content that was relevant to him as a college-age learner. Part of customizing was letting Rafael decide what type of content he wanted to bring into the sessions."
COGx Learning Specialist
Previous
Next 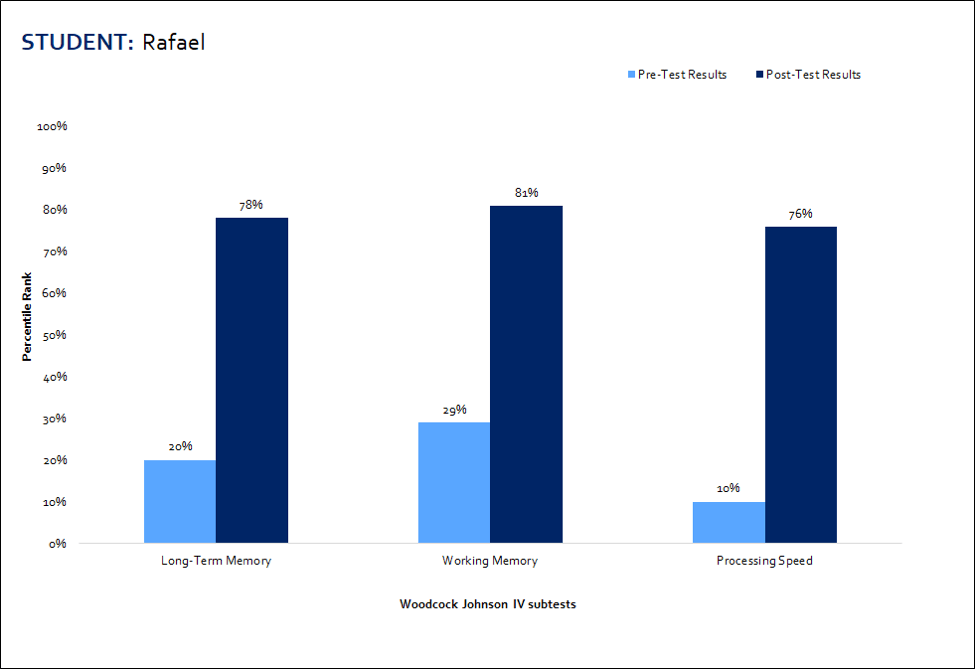 Rafael is a tech-savvy and bright teenager who aspires to become a computer programmer. He reported that during his 1st year in university, he struggled to stay focused in class and realized that doing homework was taking more time and effort for him compared to his peers. School had become a negative and stressful experience, so Rafael decided to take a year off, which is when he enrolled in COGx.

Rafael’s program focused on strengthening his processing skills (attention, working memory & processing speed), improving long-term memory and teaching effective study skills, so that he had improved stamina and an efficient way of learning.

Over the course of the program, we targeted Rafael’s ability to work with a high demand on working memory, to be able to do so quickly, and to be able to do so for a sustained period. Rafael improved noticeably, often making consi derable gains session to session. In fact, we often joked in sessions that simply telling Rafael the next goal ensured it would be met, because he so consistently met the goals set for himself.

A large influence on Rafael’s processing speed was habit. To target this, learning trials were created to intentionally force Rafael out of his comfort zone for most of the session. The habit component will be something Rafael has to maintain, but he has proven that he can work quickly and accurately with both simple and complex tasks.

Regarding long-term memory, Rafael excelled at learning and applying memory techniques and strategies. For Rafael, learning the concept and the process for the techniques was not a challenge, which meant we were able to focus very earl y on in his program on the important work of refining “how” and “when” he was applying these techniques. We practiced techniques for many different types of information so that Rafael could transfer these techniques to the various types of information he may encounter in the future, including articles and essays, miscellaneous facts, auditory information, and sequenced information.

A large focus of sessions was putting Rafael in a challenging learning trial and giving him the opportunity to try, evaluate, and then try again. Because Rafael had very strong self-awareness and metacognitive skills from the beginning, we were able to leverage and build on this so that Rafael can now more accurately (and quickly) identify if something is learned, what to do if it is not, and how to be a good “judge” or “boss” of this process, which means keeping a high level of defense in order to avoid sabotage or mistaking “familiarity” with “knowing”.

Outcomes
By the end of his program, it became a challenge as his trainer to keep him challenged enough as he continued to reach new levels in terms of what he could do with his memory. Rafael now has a very strong grasp on techniques and strategies and knows how and when to apply them. In fact, he even requested challenging articles so that he can apply the techniques and then present in videos that he would create at home. Following his program, Rafael re-enrolled in university and is on track to graduate next year.
Comments are closed.