Program Goals
To increase Cara’s processing speed, to reduce her impulsivity, and to improve her ability to remember information and organize thoughts so that she can learn more quickly and easily.
"I learned tricks that help me learn better and faster."
Cara
"She has structure to her learning now and it looks like she knows what she is doing. She is less disruptive"
Teacher
Previous
Next 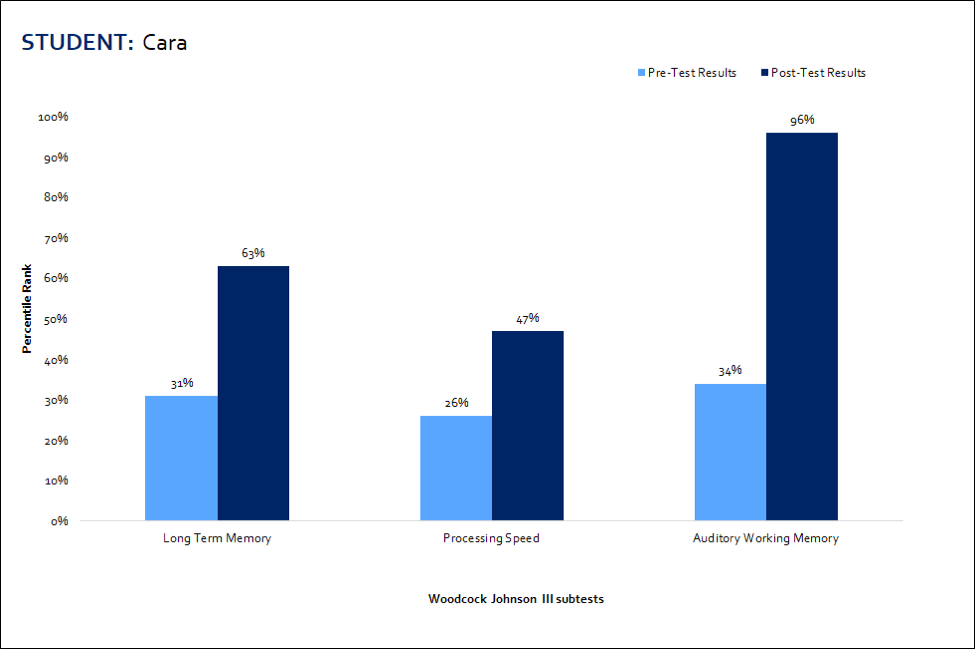 At the start of her program, Cara was apprehensive and struggled with fear of failure. However, this soon diminished as an alliance was built and Cara revealed a great internal motivation to learn.

Some of Cara’s difficulties did not make themselves fully apparent right away. As Cara became more comfortable, she began to push back on certain tasks, which was helpful and revealing because it pointed directly to specific challenges underlying the tasks. Cara also often tried to jump ahead in tasks, and this was consistent with her learning in the classroom.

Cara’s program focused on increasing her processing speed, reducing her impulsivity and teaching her evidence-based memory techniques and strategies.

While raising Cara’s processing speed was a program goal, it became apparent Cara’s impulsivity needed to be addressed first to resolve her tendency to become lost and have to start over. Cara was instructed to complete meticulous tasks with a focus on accuracy. These tasks were initially frustrating for her, as she often sought to prove her own intelligence by trying to do everything as fast as possible.

As she grew more accustomed to working carefully, we introduced Cara to visualization techniques in order to improve her recall and help organize her thought process. Naturally creative and a visual learner, she picked up on it quickly and we were able to use it to support her when working carefully. As she grew more confident at making strong connections, time was targeted to make Cara work more efficiently.

Cara learned how to use visualization among other techniques to support her recall when studying information. This began with material provided in the session and ultimately Cara identified on her own that she was able to apply these techniques to things like learning new vocabulary words, poems, and other topics she was required to learn.

Cara’s greatest achievement was how sophisticated her learning process had become, which was apparent in her ability to work independently in identifying how to study, when to study, and when she could move on confidently having learned and understood new material.

Cara reported that she began applying memory techniques while taking notes in class and applied strategies of retrieval, such as self-testing, on her ride home back from school.